The Revenue Estimating Conference (“REC”), comprised of a three-member panel (Kraig Paulsen, Holly Lyons, and David Underwood) met this morning (3/10/22) as part of their standard schedule of meetings to estimate future state revenues. A summary of the information discussed during the meeting is below, along with this linked spreadsheet distributed after the meeting, which contains more detailed revenue information by category (e.g. sales / use tax, personal income tax, etc.). A recording of the full meeting may be viewed here (LINK).

Summary: Iowa’s revenues continued to grow year over year. Specifically, FY22 revenue estimates grew by $370.5 million over FY21 actual revenues, which equates to nearly 4.2% growth. Importantly, this estimate also accounts for the future impact of a historic tax reform bill signed into law last week, which will reduce state revenues in future years due to lower tax rates - estimated to result in $14.8 million fewer dollars in FY23 as compared to FY22 estimates (equating to a 0.2% decrease in revenue for FY23). For additional background and perspective, the December 2021 REC summary is included below. 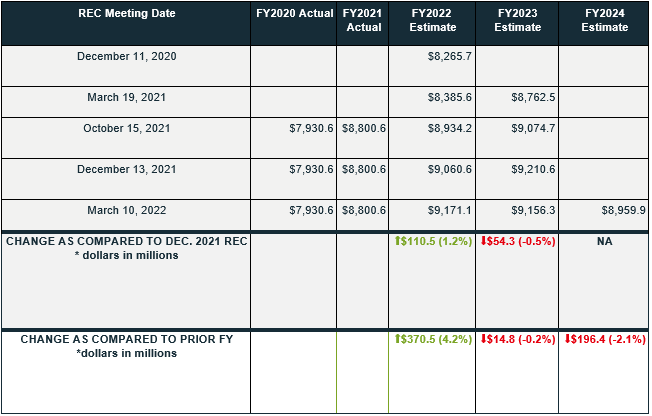 Important to Note: The REC’s number is purely an estimate. Governor Reynolds uses the December 2021 estimate to prepare her budget. The Legislature is required to use the lower of the December 2021 or March 2022 estimates for its upcoming fiscal year (FY) 2023 budgeting. 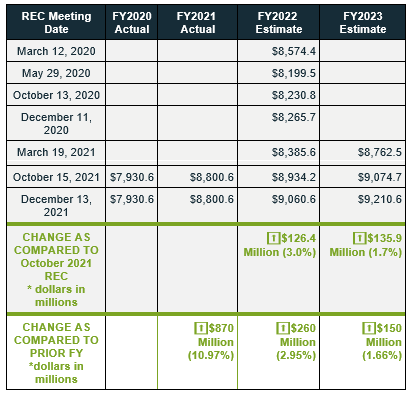 General Comments from the REC Regarding Factors Impacting Estimates: