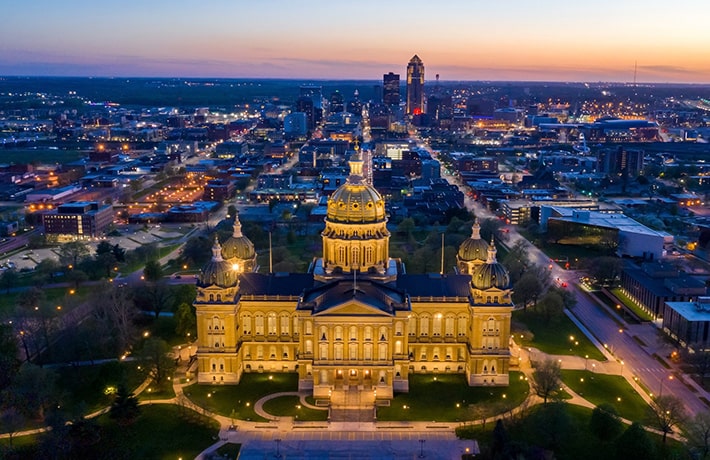 Vowing to keep Iowa a state “where you can live your life freely” Governor Reynolds announced her reelection campaign on Wednesday at the State Fairgrounds.  Reynolds is Iowa’s first female governor, assuming the role in 2017 and winning her first election in 2018.  Reynolds’ only announced Democratic opponent is Deidre De Jear.  Recent polling conducted by Selzer & Company showed Reynolds with an 8-point lead among likely midterm election voters over DeJear (51-43).

The Revenue Estimating Conference (REC) met on Thursday to estimate state revenues for fiscal year 2023.  The REC is established in Iowa Code Section 8.22A and it meets at least three times per year, including one time in March.  The legislature is required to use the lower of the March or December estimates to form the basis for its upcoming appropriations process.  The REC consists of three members: the governor or the governor’s designee, the director of the legislative services agency or the director’s designee, and a third member agreed to by the other two.  Currently the members are Kraig Paulsen, Acting Director of the Department of Management, Holly Lyons, Director of the Legislative Fiscal Agency and David Underwood.

In a sign the 2022 session is progressing to a close, the House moved several budget bills out of subcommittee on Thursday. First moved were the Judicial and Justice System budgets, Department of Agriculture and Land Stewardship, Department of Natural Resources, and Department of Transportation budgets.  Word is that next week’s activity on the Hill will be all about the budget!

This weekend is daylight savings time - be sure to set your clocks forward on Sunday!  However, we would no longer need to adjust to time changes if HF 2331 were to become law. This proposal would establish daylight savings time as Iowa’s official time. Twenty other states have passed similar laws. The bill’s floor manager, Rep. Mike Sexton (R-Rockwell City), believes that the annual time changes create, “significant public health and safety risks, including increased risk of adverse cardiovascular events, mood disorder, motor vehicle crashes.”

The events in Ukraine have been on the mind of all of us and manifested at the Iowa Legislature in House Resolution 108 signed by both Republican and Democratic House members.  HR 108 states that the House of Representatives calls for the end of hostilities in Ukraine and respect for the independence of the people of Ukraine; condemns in the strongest possible terms Russia’s unnecessary, violent, and immoral invasion of Ukraine and attacks on the Ukrainian people; and commends the courage and resolve shown by the Ukrainian people in their pursuit of sovereignty and democracy, and pays tribute to the many men and women who gave their lives in pursuit of a free and democratic Ukraine.

More interesting filings for this next election cycle: